This time of year the Detroit-centric internet is full of Detroit Lions Thanksgiving Game facts.

Here are some more:

Neither had we until we were looking through this 1938 Thanksgiving game program. 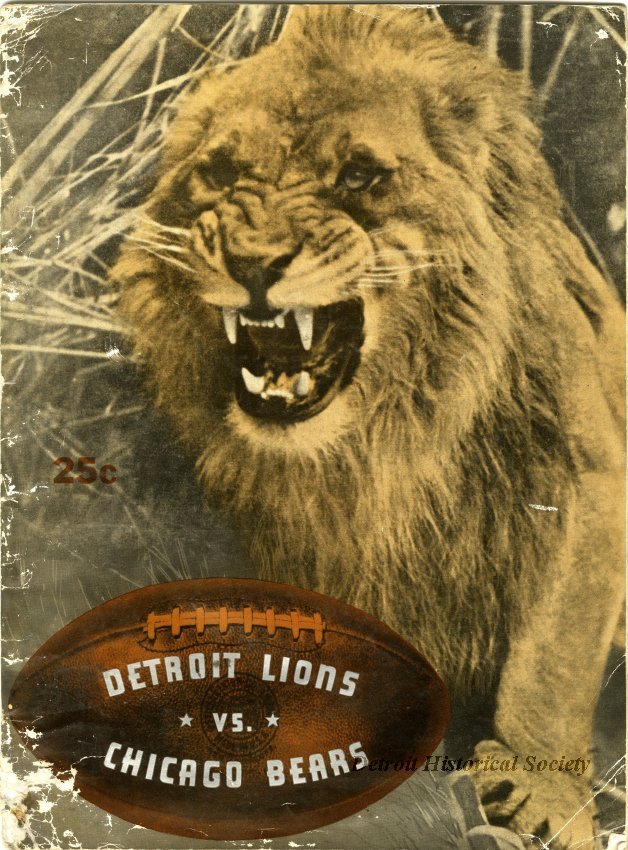 With this image inside:

The program text under the image of the trophy reads:

When the Detroit Lions and Chicago Bears square off in Briggs Stadium            Thanksgiving morning, they will contend for the “Red” Grange Trophy, a handsome  symbol of the traditional rivalry between these two great professional football teams.

Like the famous “Little Brown Jug” which the University of Michigan and Minnesota  battle for each season, the “Red” Grange Trophy is tangible evidence of a rivalry          which transcends the mere will to win a game.

To gain possession of the trophy for a year, a team must win two games – one at home and one away. […]

According to the Detroit Free Press, Lions owner George Richards named the trophy after Grange – the University of Illinois and Chicago Bear stand-out – for his part in popularizing the professional game. However, in this case popularity is relative. Thanks to Grange, professional football was definitely more popular in the 1930’s than it had been in the 1920’s. But, it was still far behind baseball in the professional ranks and wasn’t even the most popular gridiron offering as it played second fiddle to college football arguably into the 1970’s.

Knowing this, the NFL of the 20’s and 30’s emulated college football. They mirrored their rules and co-opted their traditions: cheerleaders, marching bands, fight songs, live-animal mascots, and even rivalry trophies (at least in this one case) in an attempt to redirect some of the enthusiasm for the college game toward the pros.

Some of these college traditions found a home in the pro game; Gridiron Heroes can still be heard at Ford Field when the Lions score, and several of the older NFL franchises have team songs, but other things disappeared – figuratively and literally. For instance, The Red Grange Trophy has been lost to history.

The NFL’s first, and possibly only, rivalry trophy was mentioned in the Detroit Free Press when it was created in 1935 and described by the newspaper as a “Lion and Bear attempting to climb to the top of the world with a silver football as their objective.” It credits Mary Ellis Bryan; “Detroit society-girl and sculptress”,  as its creator.

After that, it becomes harder to track as it is only spottily referenced in the Free Press and other Michigan newspapers over 1935 and 1936. Curiously, it was not mentioned at all in 1937 and the trophy was last called out in the Thanksgiving morning  (1938) edition of the Free Press.

The Free Press article provided a preview of the Thanksgiving game  and wrote that the “trophy as well as other other laurels will be the prize for the winner.”  Oddly, while the summary in the sports section the next day chronicled all the game action, it makes no mention of the trophy being presented.  It was simply never mentioned again, not even the next season.

To further the mystery, the game program and the newspaper contradict each other regarding the rules by which the trophy was won. The newspaper seemed to indicate it was to be awarded to the winner of the Thanksgiving game, while the program clearly indicated that one team had to win both games in given year to take possession. Even the trophy’s creation date is reported inconsistently; 1935 for the Free Press and 1934 in the program. In this regard, the newspaper is the authentic date as Grange visited Detroit for the formal dedication ceremony.

Since it is unclear when it was actually awarded, the trophy’s chain of custody is similarly unclear. Under the program rules the first year the trophy should have been awarded was 1937 when the Bears won both games, but this was not covered in the Free Press, or the Chicago Tribune. With Detroit taking both games in ’38 it could have been in the Lions possession when the trail goes cold, but, this assumes it was presented to Detroit after the game on Thanksgiving 1938 like the Free Press promised. Maybe it never made the trip from Chicago to Detroit ahead of that second game? Or possibly it was never presented to Chicago in 1937 to begin with. The only record on the trophy actually being presented was from the Battle Creek Inquirer on 11/29/1935 after the Lions beat the Bears 14-2 with Lions QB Dutch Clark scoring all 14 of the teams points (one rushing TD, one receiving TD, and he kicked both the extra points).  The rest of the trophy’s newspaper ink positioned it as the prize for the contest, but provided no information about who took it home.

Despite the mystery, the Lions/Bears rivalry, one of the NFL’s oldest, proved to be worthy of a trophy. Spanning 85 years* and counting, the Lions (1934 to present) have won 72, the Bears 94, and they have tied 3 times. Now if only someone could find that darn trophy.

*89 if you count the 4 seasons (1930 to 1933) the Portsmouth Spartans existed before the franchise relocated to Detroit. Including these years also pushes the totals between the clubs to 180 games.